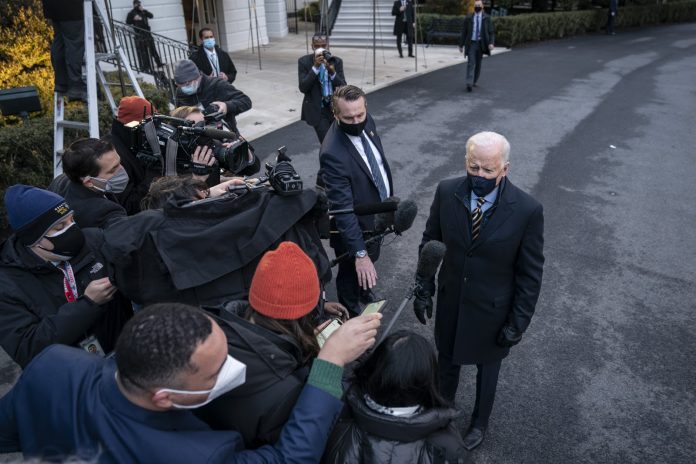 The bill immediately met with Republicans and some Democrats’ resistance due to its lack of focus, falling short on delivering pandemic-ending measures, protecting incomes, and supporting economic recovery.

President Joe Biden stated that while he would be open to decreasing the $1.9 trillion price tag, he insisted that the Republican demands were not aligned with the American public, which he says wants lawmakers to “act big and quickly.” Biden declared, “My hope is that Republicans in Congress listen to their constituents. According to the polls, there is overwhelming bipartisan support.”

However, a closer examination reveals that the COVID-19 relief bill is a potpourri of multiple controversial, sweeping changes. The majority of expenses do not further public health efforts, and minimum wage increases may actually hurt the working class.

President Biden tweeted on Feb. 8, “We don’t have a second to waste when it comes to delivering the American people the relief they desperately need. I’m calling on Congress to act quickly and pass the American Rescue Plan.” If the primary purpose of the $1.9 trillion in funds is to drive the COVID-19 relief effort, it should follow that the majority of funds are appropriated for this purpose.

According to editor Peter Suderman from Reason, this could not be further from the truth. He reports that the President’s plan is “padded with non-urgent, pre-existing Democratic policy priorities that have, at most, only tangential relationship to the crisis at hand.”

The Committee for a Responsible Federal Budget (CRFB), a nonpartisan, nonprofit organization, reports that only 1% of funds will go towards COVID vaccines. Only 5% of funds will truly target public health needs related to the pandemic. It leaves 94% of the $1.9 trillion funds allocated elsewhere.

CRFB explains that “nearly half of the package will be spent on poorly targeted rebate checks and state and local government aid, including to households and governments that have experienced little or no financial loss during this crisis.” Over 15% of the package, about $300 billion, will go towards “long-standing policy priorities that are not directly related to the current crisis,” including expanding Obamacare subsidies and increasing the minimum wage.

What CRFB cites as the most concerning is the inclusion of the pension bailout issue. It will only expand unemployment benefits through August, eliminating them a month earlier than President Biden proposed and several months before scheduled.

Given the longstanding concerns regarding multiemployer pensions, lawmakers should take ample time in a separate bill to reform these plans rather than haphazardly addressing them amid crisis legislation. Loss of benefits for unemployed workers is not an issue to be taken lightly in the current economic climate.

Many lives are hanging in the balance, yet the COVID-19 relief bill is being exploited to further partisan goals. Buried in the 591-page bill is more than $100 million allocated towards a controversial Silicon Valley underground rail project in California. Section 7006 of the bill related to the House Transportation Committee includes a funding clause appropriating $30 billion towards transit networks to “prevent, prepare for, and respond to coronavirus,” including operating expenses and capital investments.

The bill includes $1 billion in capital investment for “all projects under section 3005(b) of Public Law 114-94 that received allocations for the fiscal year 2019 and 2020” except “projects open for revenue service.” Phase two of the Bay Area Rapid Transit (BART) expansion fits this definition perfectly, and according to a Fox Business review, would receive approximately $112 million in funding.

This extension involves using a gigantic boring machine to drill a tunnel for rail transit under San Jose, CA and has repeatedly exceeded cost estimates. As a result, local Bay area officials have expressed outrage over the disproportionate amount of local sales tax funds going towards the project.

Could kill jobs and increase cost of living

From a superficial view, minimum wage increases are long overdue and would benefit working families. However, detailed economic analyses have found that the changes would do more harm than good with the current state of affairs.

According to a Feb. 2021 analysis titled “The Budgetary Effects of the Raise the Wage Act of 2021” by the nonpartisan Congressional Budget Office (CBO), while an estimated 0.9 million individuals would be lifted out of poverty by 2025, 1.4 million jobs would be lost. The budget deficit would increase by $54 billion, and the prices for goods and services would be raised.

Furthermore, as Sen. Joni Ernst (R-Iowa) said on the Senate floor at the beginning of the month, “A $15 federal minimum wage would be devastating for our hardest-hit small businesses at a time when they can least afford it.” The Republican amendment filed by Ernst to prevent a federal minimum wage increase during the pandemic passed unanimously on Feb. 5.

On a macroeconomic level, short-term gains flaunted by lawmakers would likely be at the expense of long-term disruptions in the American economy. According to an analysis conducted by a University of Pennsylvania team, based on the Penn Wharton Budget Model (PWBM), the “$1.9 trillion in spending in the full Biden relief plan would increase GDP in 2021 by 0.6 percent. Over time, the additional public debt resulting from the Biden plan would decrease GDP by 0.2 percent in 2022 and 0.3 percent in 2040.”

House Speaker Nancy Pelosi (D-Calif.) has announced that Democrats plan to ram the bill through the legislative process by the end of the month. On Feb. 18, Pelosi alluded to the “reconciliation” process of approving a package with a simple majority of 51 votes instead of 60 in the Senate: “At the same time, there is communication with the Senate as to what the Byrd rule will allow in the bills as we go forward.”

Americans may rightly question why 94 percent of a $1.9 trillion bill focuses on everything except what it is named for.

Boosting tangential projects and forwarding partisan agendas by burying them in crisis legislation is the aim of this bill. With only 6% of funds allocated towards vaccines and COVID-19 public health efforts, the relief bill ultimately fails to address the current crisis. Simultaneously, vast amounts of hidden funding for non-essential projects will have long-term repercussions for the U.S. economy.