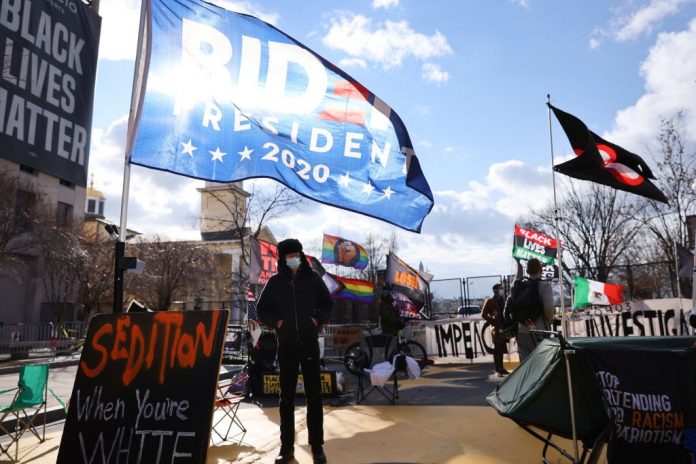 For the first time since the revolutionary group’s founding in 2013, Black Lives Matter (BLM) has made public information of its finances in an exclusive with Associated Press on Feb. 23.

AP says the Black Lives Matter Global Foundation, which was founded after George Zimmerman was acquitted in the murder of Trayvon Martin, brought in more than $90 million in 2020 and is “now building infrastructure to catch up to the speed of its funding and plans to use its endowment to become known for more than protests.”

According to the report, BLM spent $21.7 million on official and unofficial local chapters and 30 “Black-led organizations,” while the Global Foundation spent $8.4 million on administrative expenses such as “staffing, operating and administrative costs, along with activities such as civic engagement, rapid response and crisis intervention,” and finished the year with over $60 million in liquidity.

Co-founder Patrisse Cullors told AP the group’s 2021 ambitions was “taking the dollars we were able to raise in 2020 and building out the institution we’ve been trying to build for the last seven and a half years.”

While the information given to AP does not state who the main donors were and notes BLM “declined to name prominent donors,” it does share that average donations to BLM through its main fundraising platform are only slightly higher than $30 and only 10 percent of the donations are recurring.

At the end of 2020, BLM was embroiled in internal conflict gone public as local chapters accused the group’s main branch of withholding funding.

A Dec. 12 Politico article said 10 local chapters had severed ties with the Global Foundation because “They are furious that Patrisse Cullors, its remaining co-founder, assumed the role of executive director of the group,” and that inner conflict arises from a “lack of transparency over money the movement has raised and how chapters can access it.”

On Feb. 19, English footballer for the Nottingham Forest club, Lyle Taylor, said he would no longer be taking a knee for BLM before games because of the organization’s Marxist background, “I took the decision because I felt that enough was enough… not enough people have looked into the organization that has brought this all to the fore,” said Taylor in an interview with LBC Radio.

“But by the same token we are hanging our hat on a Marxist group who are… looking to defund the police, they’re looking to use societal unrest and racial unrest to push their own political agenda, and that’s not what black people are, we’re not a token gesture or a thing to hang your movement on just because it’s what’s powerful and it’s what’s going on at the moment.”

By Cullors own admission, in a 2015 interview with Real News Network she said herself and co-founder Alicia Garza “are trained organizers.”

“We are trained Marxists. We are super-versed on, sort of, ideological theories. And I think that what we really tried to do is build a movement that could be utilized by many, many black folk.”

In October of 2020, Cullors inked a deal with Warner Bros. Television Group to “develop and produce original programming for all platforms: streaming services, cable, and the five broadcast networks.”

In the press release, Warner Bros. described Cullors as “one of the most influential thought leaders in American public life,” while the BLM Executive Director described herself as a “long time community organizer and social justice activist.”

The financial snapshot of the Global Foundation obtained by AP shows “some chapters have received multiple rounds of funding in amounts ranging between $800 and $69,000, going back as far as 2016.” Cullors said in an interview with the news outlet, “We were often scraping for money, and this year was the first year where we were resourced in the way we deserved to be.”

The Chinese Communist hand in BLM

According to New Zealand author, Trevor Loudon, Black Lives Matter’s parent organization is an avowedly socialist group with ties to the Chinese Communist Party by the name of Liberation Road, who describes its ideology on the About Us section of its webpage as “We learn from the communist Chinese leader Mao Zedong, with his insistence that all correct ideas come ‘from the masses, to the masses.’”

BLM co-founder Alicia Garza is also the Principal of Black Futures Lab, which discloses itself as a “fiscally sponsored project of the Chinese Progressive Association” on its donation page.

The Chinese Progressive Association (CPA) is a “big voter registration group [and] community organizing group” based out of San Francisco, said Loudon in an interview with Epoch Times.

In May of 2020, the San Francisco branch of the CPA signed an open letter to Joe Biden warning the Democrat candidate, “Playing to right-wing nationalism and fanning anti-China sentiment will also come at a cost at the ballot box.”

The letter also demanded Biden, which “can and should beat Trump and the GOP” should be “strengthening and supporting the World Health Organization — without undermining it by fueling greater hostility towards China,” as part of his administration’s SARS-CoV-2 pandemic response.

On Inauguration Day, President Biden signed 17 Executive Orders establishing an array of policies such as rejoining the Paris Climate accord and the World Health Organization.

Previous articleSenator Cotton: US Must End the Influence of the ‘Evil Empire’ in Hollywood
Next articleHong Kong Actor Anthony Wong: Blacklisted by the CCP, Suffers 6 Years of No Income