Home US Mike Lindell Sued by Dominion Systems For $1.3 Billion
US 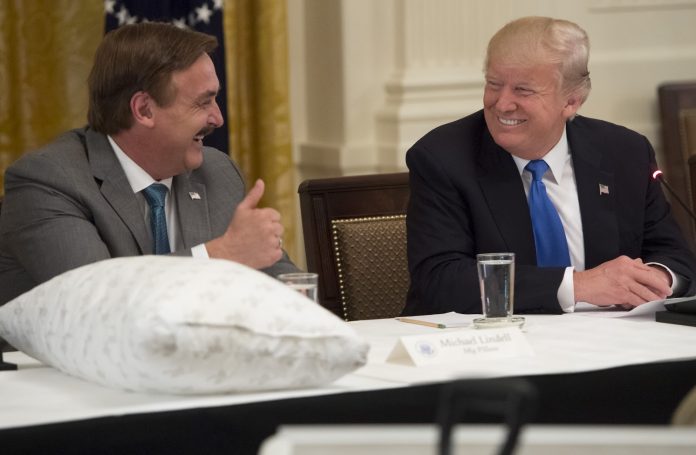 Mike Lindell, the CEO of Minnesota-based business MyPillow, has been slapped with a $1.3 billion defamation suit by Dominion Voting Systems. The lawsuit, filed in a federal court in the District of Columbia, accuses Lindell of repeatedly telling a “Big Lie” that Dominion rigged the 2020 presidential election in Biden’s favor. It claims that hundreds of documented audits and recounts have been done to prove Dominion’s voting machines’ accuracy and that the company is looking forward to proving these facts in court.

Lindell has welcomed the lawsuit, saying that he has been looking forward to Dominion suing him. In the Trump administration’s final days, Lindell had visited the White House to promote his theories. Trump even promised Lindell that he would back his bid for the governor of Minnesota should he join the future race.

The “MyPillow Guy,” as Lindell is popularly known, took special note of the words “Big Lie” in the lawsuit, saying that this was an expression coined by Nazi leader Adolf Hitler. He slammed the term, stating that the “Big Lie” is the voting machine company rather than himself. Lindell stands by his claim of the voting machines rigging the 2020 election. He released a 20-minute video discussing the issue this month.

Dominion CEO John Poulos and Dominion lawyer Megan Meier allege that Lindell does not actually believe in the company committing election fraud and that he is only spreading misinformation to boost his business.

They say that MyPillow’s defamation campaign, which was accompanied by promo codes like “FightforTrump,” “QAnon,” and “45,” raised its sales by up to 40 percent and continues using people’s outrage at the election to its business advantage.

The duo stated that they are looking forward to examining MyPillow’s finances as part of the case. Lindell dismisses such claims and noted that though MyPillow’s sales did surge for some time, he eventually suffered a negative outcome for promoting his claims. For instance, over 20 retailers, including popular brands like ‘Bed, Bath, and Beyond,’ have dropped his company’s products. Social media platform Twitter has even banned his personal and company accounts.

Lindell’s case is the third defamation suit that Dominion has filed against the people for wrongly accusing the company. According to CEO Poulos, it likely won’t be the last.

“Despite repeated warnings and efforts to share the facts with him, Mr. Lindell has continued to maliciously spread false claims about Dominion, each time giving empty assurances that he would come forward with overwhelming proof… These claims have caused irreparable harm to Dominion’s good reputation and threatened the safety of our employees and customers,” Poulos said in a statement.

Meanwhile, a top employee of Dominion who had sued the members of the Trump campaign, including Sidney Powell, Rudy Giuliani, and media outlets like One American News Network and Newsmax, is currently in hiding and fearing for his life.

The employee, Eric Coomer, the director of product strategy and security at Dominion, notes that extremists had put a $1 million bounty on his head, believing that he participated in rigging the election against Trump.

Previous articleRepression of Falun Gong Practitioners Living Outside China Part of a ‘Sophisticated Campaign’
Next articleChina Emits More Carbon in 16 Days Than Australia Does in One Year: Report