Home US Arizona Judge to Maricopa County: ‘Hand Over Election Ballots to Senate’
US 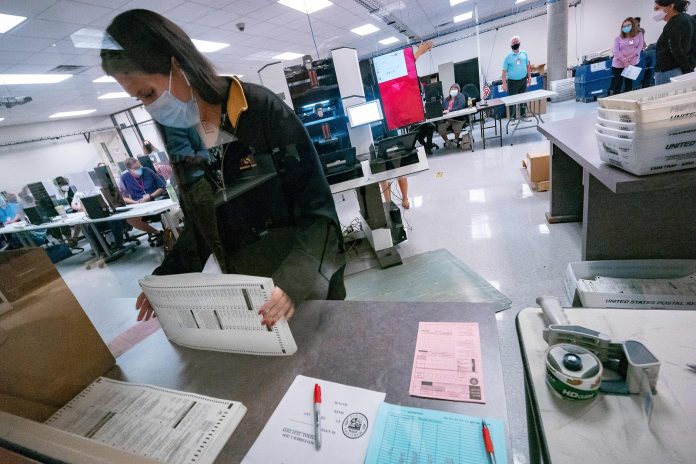 Maricopa County Superior Court Judge Timothy Thomason has instructed the county to transfer around 2.1 million ballots from the 2020 presidential election to the state Senate and allow an audit of its election equipment.

The issue started back in December when the then-Senate Judiciary Chairman Eddie Farnsworth and Arizona Senate President Karen Fann issued subpoenas asking Maricopa County officials to provide all election materials for an audit in response to Trump’s claims that election fraud was committed.

In January, the subpoenas were reissued by Senator Warren Peterson, Farnsworth’s successor. The county challenged the subpoenas in court, arguing that handing over ballots is illegal since state laws mandate that ballots be kept securely for two years after the election.

Thomason rejected such arguments, pointing out that the confidentiality laws are not designed to prevent state authorities from doing their jobs. He also noted that the right to a secret ballot wouldn’t be violated by handing over the 2.1 million ballots since there is no way to identify the ballot with any specific voter.

The judge affirmed that the Senate has a valid legislative purpose in demanding the ballots’ handover and concluded that the subpoenas are legal and enforceable.

“The Arizona legislature clearly has the power to investigate and examine election reform matters. Accordingly, the Senators have the power to subpoena material as part of an inquiry into election reform measures. As such, the Subpoenas have a proper legislative purpose. The Subpoenas also do not violate separation of powers principles. Production of the subpoenaed materials would not violate confidentiality laws,” the judge wrote in the ruling.

Maricopa County officials have decided not to appeal the ruling after discussing the issue with their attorneys. Supervisor Jack Sellers, county board chairman, said that they respect the judgment and soon would present election materials to the Arizona Senate.

After the ruling, Senate President Fann said that she was grateful for the judge who looked at the bigger picture, recognizing that the subpoenas were never about overturning election results but about validating the voting system’s integrity.

Fann was looking to hire Allied Systems Operations Group (ASOG) as an auditor. But since the company’s employees served as witnesses for the Trump campaign, there will be auditor independence.

“I think that would be difficult for anyone to select them at that point, just because of the perception out there. However, I do believe they’re fully qualified. However, there’s a perception that they would not be fully independent,” Fann told Arizona Mirror.

Meanwhile, the Arizona Senate has passed a bill that will give the state legislature the right to subpoena election records, bypassing any contrary laws. The bill was passed 16-14 along party lines, with Republican senators supporting it. The new rule will be retroactive as of Dec. 31, 2019, meaning that the Senate can use it to subpoena election records from this date. Senator Peterson introduced the bill.

Republican Senator JD Mesnard said that the bill is less about the Nov. 3 presidential election and is more about clarifying the Senate’s authority and election integrity. If something happened in future elections and the Senate wanted to investigate it, this new rule will make the process easier.