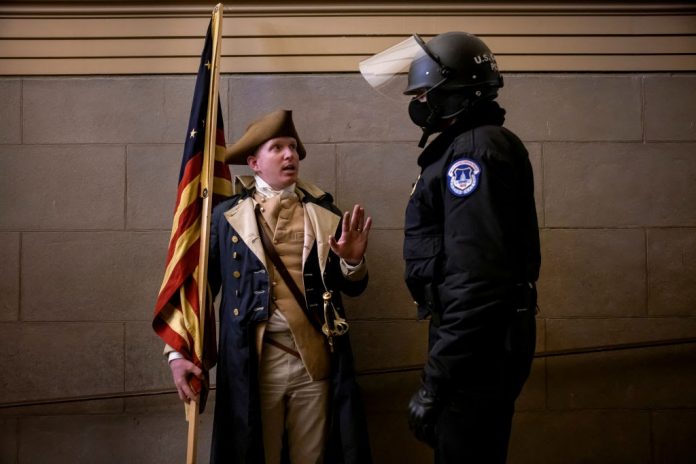 FBI Director Christopher Wray recently testified at the Senate Judiciary Committee, revealing that the intelligence agency is grouping pro-Trump supporters who rioted on Jan. 6 into three different groups. The classification is based on how violent the supporters were on that day.

According to the FBI, the first group is the largest and mostly consists of peaceful protestors who might sometimes turn rowdy but were not violating any laws. Wray stated that this was the group that needs to be talked about the least as they are not a threat.

The second group consists of people who came to the rallies to participate in peaceful protests. However, they got swept up in the emotions of the rally and ended up engaging in “low-level criminal behavior.” Some of them trespassed on Capitol grounds but did not breach the building. Though their activity constitutes criminal conduct, they need not be urgently addressed.

The last group, which is also the smallest, is classified as the most serious threat. It includes people who entered Capitol grounds and engaged in violence with officials. A few even attempted to disrupt Congress members from carrying out their responsibilities.

“Some of those people clearly came to Washington, we now know, with plans and intentions to engage in the worst kind of violence we would consider domestic terrorism… And so, some of that coordination appears to have been coordinated travel, coordinated meeting up, coordinated in terms of what kind of gear they might be wearing or bringing with them, that kind of thing,” Wray said at the hearing.

The FBI Director defended his agency’s handling of an intelligence report that had forewarned about potential violence at the Capitol on Jan. 6. The report, prepared by the FBI’s Norfolk, Virginia office, was apparently distributed through the FBI joint terrorism task force and posted online for other law enforcement agencies to view.

The Capitol Police leaders say that they were not aware of the report. The department’s former chief claims he received no information from the FBI that would have helped in anticipating the violence. Wray dismissed such claims.

“The smartest thing to do, the most prudent thing to do, was just push it to the people who needed to get it…. We did communicate that information in a timely fashion to the Capitol Police and (Metropolitan Police Department) in not one, not two, but three different ways,” he said to the committee.

Calling the Jan. 6 breach of the Capitol “domestic terrorism,” the FBI Director warned that America is facing a rapidly growing threat of homegrown violent extremism. He dismissed Republican’s and Trump supporters’ suggestions that anti-Trump groups triggered the riots. Wray warned that the problem of domestic terrorism is not going away anytime soon.

FBI recently arrested Federico Klein for his involvement in the Jan. 6 attack. Klein was one of Trump’s appointees to the U.S. Department of State and was designated a ‘Schedule C’ political appointee. In 2016, Klein worked on Trump’s election campaign.

The 42-year-old’s role in the riots is unclear, and it is unknown whether he has received any legal representation. He is the first person from the Trump administration to be facing criminal charges related to the Capitol break-in. According to Klein’s mother, her son was indeed in Washington on Jan. 6. However, he was at a mall.