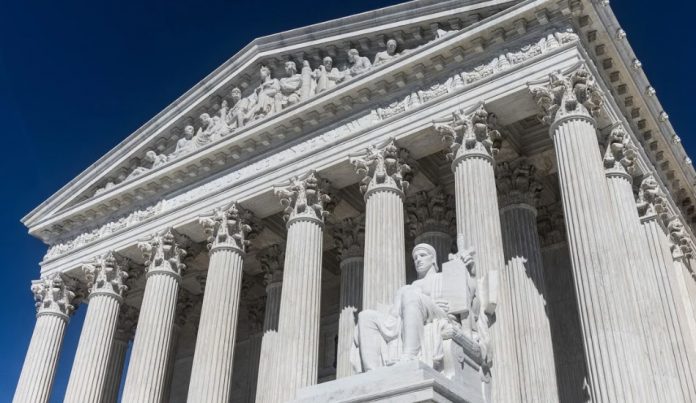 The plaintiffs in both cases argued that Arizona’s election integrity laws are consistent with the federal Voting Rights Act (VRA) and must be upheld. Democrats claim that Arizona’s laws violate VRA by restricting vulnerable groups from fully practicing their right to vote.

Arizona has a policy that excludes provisional ballots cast in-person on Election Day at a location outside of the voter’s precinct. Another policy, H.B. 2023, only allows a voter’s close family members, caregivers, election officials, and mail carriers to handle their early ballot.

These rules were challenged under the VRA since Section 2 of the act prohibits states and localities from imposing any requirement to block a person from voting based on their color or race. A U.S. district court upheld Arizona’s rules as legally valid.

However, a panel of the 9th Circuit Court of Appeals agreed with the claim that Arizona’s election laws were discriminatory. The court stated that the criminalization of collecting another person’s ballots affects Hispanic, American Indian, and African American voters more since they are generally poorer and face difficulty in receiving and sending mail. It is a violation of Section 2 of the VRA, the court said.

At the Supreme Court, Brnovich dismissed these findings, saying that Arizona’s election laws do not violate VRA regarding racial discrimination.

“Requiring in-person voters to cast their ballots at assigned precincts ensures that they can vote in local races and helps officials monitor for fraud… Restricting early ballot collections by third parties, including political operatives, protects against voter coercion and preserves ballot secrecy,” Brnovich said in a statement.

Michael Carvin, attorney for the Arizona Republican Party, also stated that Arizona has never denied any citizen their rightful voting opportunity. When Justice Sonia Sotomayor argued that being poor is, in itself, violating an individual’s voting rights, Carvin countered, stating that voting underutilization due to socioeconomic factors is not a cognizable factor under Section 2 of the VRA.

Associate Justice Samuel Alito stated that the Democrat argument makes every voting rule vulnerable to attack. Disadvantaged people will inevitably find it more challenging to comply with the election rules. The Supreme Court has a 6-3 conservative majority. A decision on the case is expected by June.

While Arizona Republicans fight for election integrity in the Supreme Court, Democrats proposed new legislation that threatens probity nationwide. H.R 1 or ‘For the People Act’ will empower the federal government to impose its election mandates on states.

“I said this bill’s title is a misnomer because I do not believe this bill has anything to do with the American people… This is a bill that’s about preserving the present Democratic majority. It is a bill by the majority, for the majority, and is intended to entrench the majority in power for years to come,” Republican Representative Tom Cole, a House Rules Committee Ranking Member, said in a statement.

One of the provisions of H.R. 1 is to automatically register all adults irrespective of their citizenship status for voting. It also mandates states to implement early voting, allow felons to vote, end voter ID requirements, practice 15 days of early voting, and enact no-fault absentee voting. House Minority Leader Republican Kevin McCarthy warned that the bill would totally erode confidence in the election process.

Previous articleMo Brooks, an Unusual Defender of Embattled NY Gov. Cuomo
Next articleThugs for Hire: The Relationship Between Beijing and the Hong Kong Triads