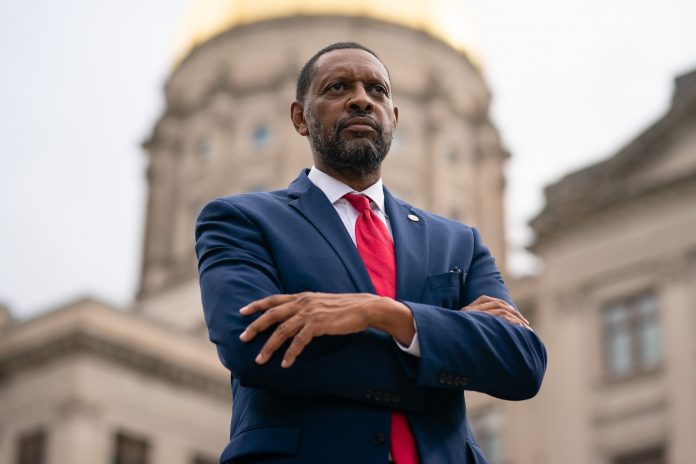 A staunch Democrat until last year, Vernon Jones left the party in January 2021 and joined the GOP. He had served as a state representative in the Georgia House of Representatives between 1993 to 2001 and 2017 to 2021 when he became simultaneously impressed by former President Trump’s political stance and distressed by the Democratic Party’s growing intolerance.

In an interview with The Epoch Times’ American Thought Leaders, Jones talked about the discrimination he faced in the Democratic Party and his experiences with ‘cancel culture.’

“Personally, I’m familiar with it (cancel culture) because I was a lifelong Democrat who came out to support President Trump. My party called me an embarrassment. They told me I should resign. They told me I didn’t share their values—I guess I don’t.”

“At the same time, liberal networks don’t let me on their stations because I wasn’t carrying the narrative of a victim or calling President Trump a racist, when in fact, Joe Biden is the one who has the bigotry in him and the Democratic Party, but they don’t want me to talk about this,” he said on the show.

Jones points out that the present Democratic Party is vastly different from what it used to be. Thirty years back, the liberal party believed in the First and Second amendment, allowing members to have an independent voice. But now, he says, if you do not want exactly what the party wants, they will call you an embarrassment.

It is especially true of African Americans in the Democratic Party who display conservative values and independent thinking. It’s as if they don’t belong in the party even though Democrats like to proclaim themselves as being open to diversity.

Fed up with the direction that the Democratic Party was heading, Jones started WakingUpAmerica.us. The former Democrat notes that many African Americans realize that the Democratic Party has never actually worked in their interests for the past three or four decades, while this isn’t true of Donald Trump. The latter implemented several programs to benefit the black community.

“I started this organization WakingUpAmerica.us because we’re out carrying a conservative message to everybody.”

For instance, Trump helped out with funding historically black colleges and released many African Americans incarcerated for nonviolent offenses. In many places that were economically devastated by Democrat policies, Trump brought development and created employment opportunities.

During the interview, he said that Democrats and Joe Biden are looking to “hang President Trump” for what a few violent people did during the Jan. 6 Capitol attack.

Jones points out that groups like Antifa and Black Lives Matter were destroying police stations, federal courthouses, assaulting police officers, and even killing innocent people during the previous summer. All this time, the left kept silent. Whether it’s Nancy Pelosi or Maxine Waters, these Democrat leaders encouraged the protesters to commit violence.

Legal scholar Alan Dershowitz has also warned Americans to fight the ‘cancel culture’ before it is too late, irrespective of where they stand politically. His comments came after a Democrat-influenced House Committee aimed to censor cable and satellite networks for airing pro-conservative channels.

“I hope all Americans wake up to this… I hope it’s not just the ‘shoe is on the other foot’ test. Now, the conservatives are the victims of cancel culture so they’re big supporters of the Constitution and constitutional rights.”

“During McCarthyism, it was the left that were the victims, and the right were the oppressors… We need both the right, the left, and also the center to stand united against censorship, against cancel culture, and in favor of the marketplace of ideas,” he said in an interview with Newsmax.