Home US Schumer: Biden Needs to Resolve the Border Crisis Quickly
US 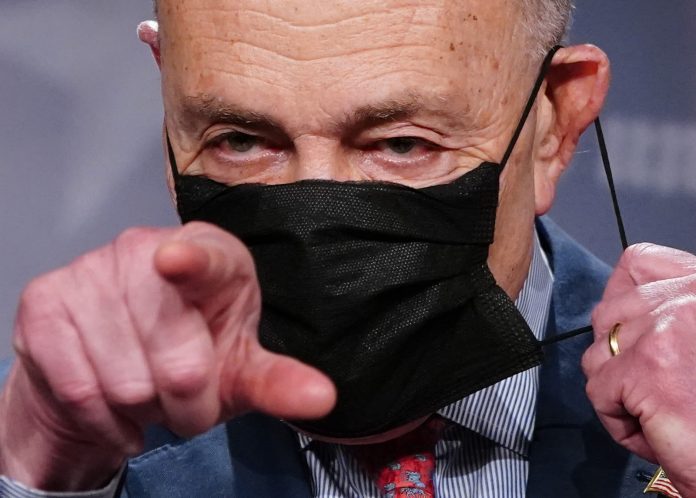 Democrats and Republicans in Congress are criticizing President Biden’s immigration policies and response to mass illegal immigration at the southern border.

In an interview with ABC, Senate Majority Leader Democrat Chuck Schumer said that the White House would have to do a better job regarding immigration. However, he deflected the blame onto the former president, saying that Biden inherited a huge mess from the Trump administration. Schumer accused Trump’s immigration policies of being horrible to the migrants; Biden’s officials, in contrast, are “rolling up their sleeves” to resolve the immigration problem.

“One of the problems with the Trump administration is that they had so much incompetence… I think it will get better in the next few months. If it doesn’t, I will go to them and say, ‘You got to do better’… And if they don’t, I will be public. But I got to give them a little bit of a chance because they inherited a big, big mess created by Donald Trump, whose views on immigrants just turned me off,” Schumer said in the interview.

Despite Schumer’s critique of the previous administration, in the first month of Biden’s presidency, illegal border crossings surged by 28 percent. Biden has relaxed immigration rules, and his administration appears much more welcoming to undocumented immigrants. Biden’s lax policies have potentially motivated large numbers of people south of the border to march north into the U.S.

Biden has also rescinded most of Trump’s restrictive immigration policies. That includes placing a 100-day pause on deportations, blocking the border wall construction, and strengthening the protections given to illegal immigrants under the Deferred Action for Childhood Arrivals (DACA) program.

Biden’s most ambitious plan is the U.S. Citizenship Act of 2021. It aims to provide an eight-year citizenship path for 11 million undocumented immigrants. However, this has been met with serious resistance from Republicans and even Democrats.

House Democrat leaders have talked to fellow members and realized that the bill currently does not have enough support to get passed. Some believe that Biden is moving too quickly to overhaul immigration.

Trump has blasted Biden’s immigration policies, accusing him of triggering a “spiraling tsunami” at the southern border that is overwhelming communities and taking away jobs from American workers. The former president claimed that the country had achieved the most secure border in American history under his governance, and Biden is shattering that border security.

Texas Governor Greg Abbott is currently facing off against Biden on border control. Abbott has delayed funding from the federal government for testing and quarantining migrant families.

The governor’s press secretary Renae Eze said that the funding came with “strings attached.”  The Biden administration was pressuring Texas to help them in their “illegal immigration program.”

She stated that the responsibility of screening and testing migrants for COVID-19 lies solely with the federal government and that such responsibilities must not be pushed to the state. Texas Democrat Representative Henry Cuellar also criticized Washington for its handling of the border crisis.

“Any president should come down [and] really spend time with border communities. You know, the president sent a delegation and a bunch of folks from the White House. They didn’t talk to anybody, not even members of Congress down here,” he told Fox News.

The leading producer of electric vehicles has found itself in a suspicious storm of criticism in China after a Tesla owner made a widely...
Read more
US

The FBI recently released a set of documents related to the murder of Democratic National Committee (DNC) staffer Seth Rich who was shot dead...
Read more