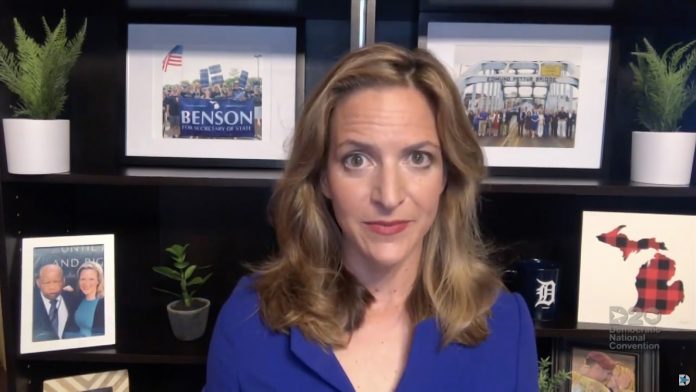 In early October, Michigan Secretary of State Jocelyn Benson had issued guidance to clerks, asking them to presume that all absentee ballot signatures are accurate. State Court of Claims Judge Christopher Murray has now ruled this guidance invalid, pointing out that Benson did not follow the proper procedure. Clerks should not follow Benson’s instructions in future elections.

Michigan state law mandates clerks must match signatures on absentee ballot applications and envelopes with signatures stored on the voter file to ensure no fraudulent votes are cast. On Oct.6, Benson asked clerks to resolve any differences in signatures in favor of “finding that the voter’s signature was valid.” Michigan Republican Party and Allegan County Clerk Robert Genetski filed a lawsuit against the guidance. On Dec. 30, they amended the suit and argued that Benson’s directive was unlawful.

Judge Murray did not state whether Benson’s directive violated any state election laws. Murray stated that Benson’s mandatory presumption goes beyond mere advice or direction and is substantial enough to add to signature-matching standards. He said that it violated the Administrative Procedures Act (APA), which refers to the process that an agency must follow when creating new rules.

According to APA, agencies have to go through several months of drafts, public notices, public comments, impact analyses, and public hearings before finalizing a rule. Then, it is submitted to the Legislature’s bipartisan Joint Committee on Administrative Rules. The committee has to take action on the rule within 15 session days, after which it is finalized and eventually filed with the Secretary of the State.

The Michigan GOP welcomed the judgment but declared that it came too late since the 2020 presidential election result has already been finalized. Ted Goodman, communications director for the state’s Republican Party, said that it was “clear from the outset” that Benson had violated election laws by asking clerks to presume signature accuracy. Clerks in the Nov. 3 election rejected less than 1 percent of Michigan’s 3.3 million absentee ballots.

Republican State Representative Matt Hall, who was chair of the state House Oversight Committee during the 2019–20 legislative term, was happy that Benson’s attempt at lawmaking was judged as a violation of her authority. He stressed that such actions are not within the Secretary of State’s responsibility and that rules ought to be respected.

“If she wants to make changes like these, she needs to work with the Legislature or properly promulgate them through the laws we have on the books – in this case, the Administrative Procedures Act… I will continue working in the Legislature to ensure people have trust in Michigan’s elections going forward,” Hall said in a statement.