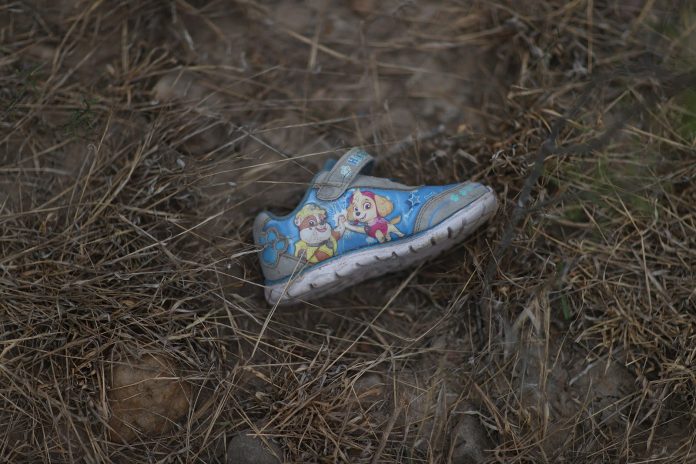 A surveillance camera has captured footage of smugglers dropping two Mexican children over the border wall into the United States. Caught on camera by the U.S. Border Patrol, the incident occurred at 7 p.m. near Santa Teresa, Texas. The video was leaked to Breitbart by a law enforcement official who was asked to remain silent on the issue.

A smuggler scaled the 14-foot high wall while the second one pushed up the kids, who were then dropped into Texas. The two smugglers then tossed a package of food to the two sisters. Then the smugglers ran off, abandoning the children in the night.

The three and five-year-old children are Ecuadorian. In the video, they struggle to stand up and walk on uneven terrain. Patrol agents soon picked up the sisters. The agents gave them first aid and transported the sisters to a hospital for a detailed medical examination. After their release, the children were held by the Border Patrol, awaiting placement by the Health and Human Services.

“That could have been anyone’s children or grandchildren being dropped and abandoned by these smugglers… It’s really heartbreaking… This video shows the real cruelty of these smugglers… They have no feelings about the humanity of these people. They are just ‘cargo’ to them… No one was waiting for these children on the U.S. side of the border… The smugglers know Border Patrol monitors this area with cameras and assume they will respond,” the veteran law enforcement official told Breitbart.

In a statement, the El Paso Sector Chief Patrol Agent Gloria Chavez said they were appalled at how the smugglers treated the two girls. She noted that if Patrol agents had not found them, the sisters would have been exposed to the harsh terrain for several more hours.

The department is working with law enforcement agencies in Mexico to identify the smugglers. Chavez also expressed worries that smuggling groups might continue using such tactics even further in the more remote desert areas.

Department of Homeland Security Secretary Alejandro Mayorkas called the smugglers “inhumane.” White House Press Secretary Jen Psaki thanked agents for saving the children.  She asked foreign parents not to send children to the U.S. border, which contradicts the Biden Administration’s position that unaccompanied minors will be released into the U.S. Psaki refused to admit that Biden’s lax immigration policies have encouraged criminals to smuggle kids.

According to border patrol sources, criminal organizations have made $14 million per day, just in February, transporting people over the U.S.-Mexico border.  American taxpayers are estimated to spend $5 million daily to deal with the migrants.

are estimated to spend $5 million daily to deal with the migrants.

“Trafficking is a multibillion-dollar industry… A lot of these vulnerable populations use their life savings. Some are essentially indentured servants and they’re working off this debt for a long period of time. In other cases, some of these migrants are asked to transport narcotics or some form of crime to work off a different part of their debt,” former Tucson Border Patrol Chief Roy Villareal told Fox News.

Previous articleDenmark Continues Suspension of AstraZeneca in Concern Over Dangerous Side Effects
Next articleRevolution: For the Love or Hatred of Humanity