The apostle Paul spent his early life working to arrest Jesus’ followers, jailing them and attempting to force them to turn against Jesus. But one incident changed Paul, altering his path in life completely. He went on to become an evangelist for Jesus, writing much of the New Testament. His story shows that no matter what mistakes a person has made in life, if they can put aside their prejudice and incorrect beliefs and ideas, redemption is possible.

Take care of the executioner’s clothing

Paul was named Saul at birth and retained this name until his conversion to Christianity, when he began going by the name Paul. He was born a Roman citizen of Jewish descent. Paul was slightly younger than Jesus and was born in today’s Turkey in A.D. 5.

Paul was an orthodox Pharisee, and while young, he devoted much of his time to the study of the Old Testament. Like most Jewish people at that time, Paul regarded emerging Christianity as a “heretical cult.” He had a poor understanding of Jesus and Christianity and wondered how Jesus could be God. How could God come to the world as a human being?

Subsequent to Jesus’ death, Christians were being persecuted and a follower named St. Stephen was arrested. The government recruited scholars from across the world to participate in the debate against Stephen. Paul was among those called to be part of the debate, and he eloquently convinced everyone that what Stephen had preached was a form of evil that confused people.

When Stephen was dragged out of the city to be stoned to death by the executioner, young Paul was at the scene to take care of the executioner’s clothing. Seeing Stephen covered with blood, Paul was even delighted. In Paul’s view, Stephen’s faith toward Jesus was very foolish.

Paul was rewarded for his achievement in Stephen’s case and was kept as a member of the persecution team, where he soon became a powerful cadre in the suppression of Christians. Paul began hunting down believers, whipping them and forcing them to say things against Jesus. He even broke into the homes of believers, grabbing them up and sending them to jail. But one occurrence changed Paul completely, altering his views of Jesus and Christianity. 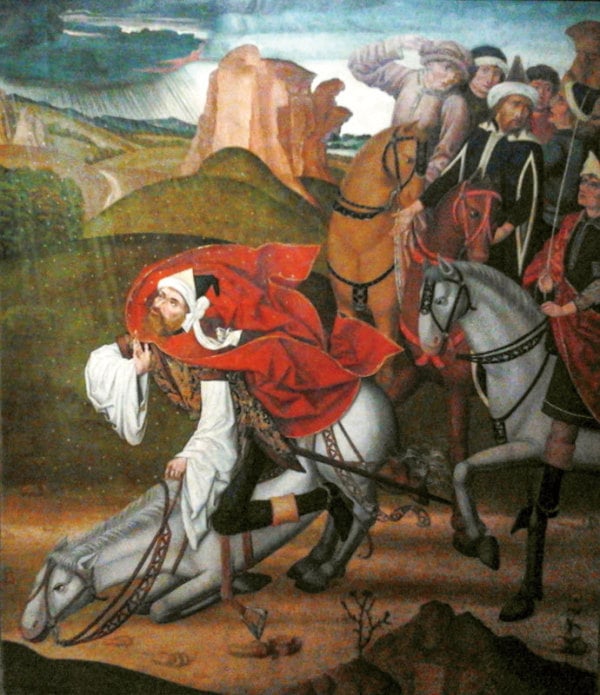 Seeing to enter Damascus City, suddenly there was a strong light in the sky, and Paul was surrounded on all sides. The famous master of the century, ‘The Reformation of São Paulo,’ is hidden in the National Museum of Warsaw, Poland. (Image: Public Domain)

In A.D. 32, Paul was ordered to make a journey to Damascus to capture the Christians. He led a small group of people, and as he neared Damascus at noon, a strong light from the sky flashed around him. At that moment, he became dizzy and fell from his horse to the ground. Suddenly, he lost his eyesight and could not see.

He then heard a voice say to him: “Saul, Saul, why do you persecute me?” Paul was scared and asked: “Who are you?” The voice replied: “I am Jesus, whom you are persecuting. Get up, proceed to the city, and there will be someone to tell you what to do.” Paul was shocked and asked: “Isn’t Jesus crucified and has died? Is it true what believers say, Jesus is still alive? Is it really wrong to persecute Jesus’ followers?”

Just when Paul could not see, Heaven opened his third eye to let him see Jesus. The people around him stood there, not saying a word, nor could they hear any sound; they only saw the flash of light. This miracle was shown only to Paul, and it was he who met Jesus. Relying on his companions, the blind Paul went on to enter Damascus. In his darkness, the helpless Paul could not eat and drink for three days.

In the city of Damascus, there was a disciple of Jesus named Ananias. In a dream, Ananias received instructions from God: “Find Paul and help him.” Paul was notorious among Christians. He had spared no effort in persecuting the Christians, capturing all those he could and jailing them. Paul’s original mission in Damascus was to arrest the Christians and bring them back to Jerusalem for punishment. Ananias was among those that Paul planned to arrest, and Ananias risked being arrested if he was found by Paul. put aside his personal safety, overcoming his fear, and obeying God’s will. He was directed to a Jewish home on a straight street to find Paul. The relatives, friends, and fellow men of Ananias had been persecuted by Paul, yet when Ananias saw Paul, his first words were: “Brother Paul!”

But Ananias was without hatred and anger and told Paul: “Brother Paul! Jesus sent me to tell you that you can see.” Ananias then touched Paul with his hands. The compassionate words and actions of Ananias moved Paul to tears, and immediately the scaly particles in Paul’s eyes fell off. Paul’s eyesight was recovered and he could once again see. Paul now believed. He recognized Jesus for who he was and went to be baptized. God healed Paul, let him see the light, and be reborn. God seeks to save everyone if they can only see the truth.

Translated by Chua BC and edited by T. Denning

From Persecutor to Missionary: The Apostle Paul (Part 2)