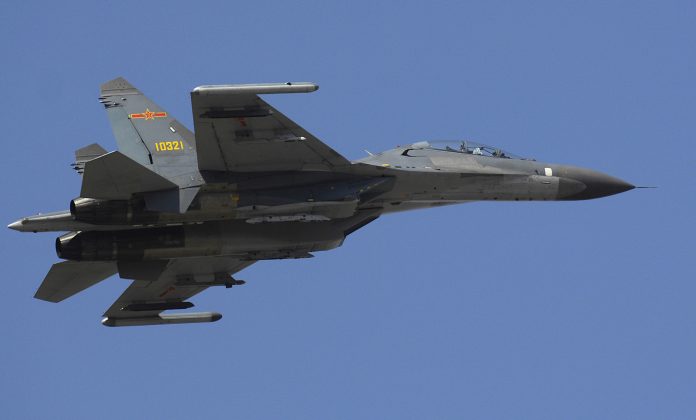 In what appears to be a warning to the new U.S. administration, Communist China recently sent warplanes into Taiwan’s Air Defense Identification Zone (ADIZ) for two consecutive days. On Jan. 23, the People’s Liberation Army (PLA) sent 13 planes, including fighter jets, nuclear-capable bombers, and anti-submarine aircraft. The next day, the PLA sent in 15 planes, including a reconnaissance aircraft, anti-submarine planes, and stealth-capable aircraft.

The U.S. State Department has urged the Chinese regime to stop its military pressure against Taiwan, which is officially known as the Republic of China (ROC). While pledging “rock-solid” support to ensure the island state has “sufficient self-defense capability,” the Biden administration called for meaningful dialogue between Beijing and Taipei.

You Si-kun, president of Taiwan’s parliament, thanked the American government for responding to Beijing’s aggression. Former Taiwanese fighter pilot Chang Yen-ting said that Beijing is testing the U.S. to see how the new president and secretary of state will react.

Taiwanese military analyst Cheng Chi-wen warned that if the United States does not react aggressively to mainland China’s actions against Taiwan, Beijing will get increasingly emboldened with its plan to annex the island.

It suggested a “peaceful resolution of cross-strait issues” rather than issuing a stern warning to Beijing against any military advances to Taiwan. This kind of “softened message” worries many Taiwanese who are getting increasingly apprehensive about America’s support.

An op-ed published in the Chinese state-backed Global Times argues that the interaction between China, Taiwan, and the U.S. has been broken and has become too difficult to repair. It accused the Trump administration of pushing the Taiwan situation to the edge of collapse. The op-ed warned Biden to distinguish itself from the “mischief” of the Trump administration. Biden must send a clear political signal affirming America’s commitment to the “One China” policy that proposes Taiwan as a part of Communist China. If Biden fails to do so, the situation might “get out of control.”

A U.S. carrier group led by USS Theodore Roosevelt entered the South China Sea amidst simmering tensions between Taiwan and the mainland. The U.S. military said that the aim of the journey is to promote “freedom of the seas.” The ships entered the South China Sea on the same day that PLA aircraft breached Taiwan’s airspace. The Chinese foreign ministry objected to America’s presence in the region, claiming that the U.S. simply wanted to “flex its muscles.”

U.S. Navy Rear Admiral Doug Verissimo, commander of the strike group, issued a statement saying that the visit is necessary to maintain peace.

“After sailing through these waters throughout my 30-year career, it’s great to be in the South China Sea again, conducting routine operations, promoting freedom of the seas, and reassuring allies and partners… With two-thirds of the world’s trade traveling through this very important region, it is vital that we maintain our presence and continue to promote the rules-based order which has allowed us all to prosper.”

Previous articleHome Run Hero Hank Aaron Died in His Sleep, 17 Days After Receiving COVID-19 Vaccine
Next article7 Things You Should Not Do During the Coronavirus Lockdown or Self-Isolation

TSMC’s Chairman, Founder Express Disapproval of Moving Manufacturing to US From Taiwan