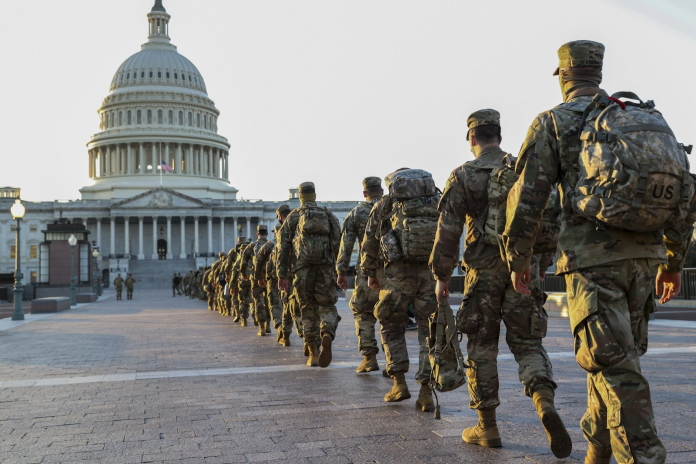 Former President Donald Trump is currently facing an impeachment trial at the Senate on charges that he incited the attack on the Capitol on Jan. 6.

Dozens of people had broken through police barricades leaving behind a trail of destruction and chaos in the building with a few injured and some dead. Earlier, Trump had given a speech that Democrats claim incited the violent attacks. Former Whitehouse advisor Mark Meadows dismissed the Democrats’ allegations as Trump had offered to provide thousands of National Guards on Jan. 6. Yet, the Mayor of D.C., Democrat Muriel Bowser, declined it.

Meadows said in an interview with Fox News:

“The president was very vocal in making sure that we had plenty of national guards, plenty of additional support because he supports the rule of law, he supports our law enforcement and offered additional help. Even in January that was given. As many as 10,000 National Guard troops were told to be on the ready by the Secretary of Defense. That was a direct order from President Trump.”

He called Trump’s impeachment unconstitutional and noted that the trial only is designed to get Democrats their ‘viral’ moment and a chance at political vengeance.

Richard Grenell, the former acting Director of National Intelligence, calls the impeachment trial an “unserious process” that is not being presided over by a Supreme Court justice, which is a standard procedure. He feels that Democrats are just establishing a precedent that Republicans will use later for their political whims. He accuses Democrats of weaponizing the government in the same way they previously weaponized the Justice Department and IRS.

John Carpay, founder and president of the Justice Centre for Constitutional Freedoms, feels that the Biden administration is highly biased due to its lack of condemnation of leftist violence. For instance, Democrats have largely remained silent even as numerous violent riots ravaged America following George Floyd’s death.

In contrast, they were swift in taking action against the attack on the Capitol. He warned that self-censorship kills free speech faster than any government policy or law. The best way to protect the First Amendment is by not being intimidated by the name-calling tactic adopted by the other party.

“Ideally, in a free society, if people believed in the rule of law, they would denounce both the storming of the Congress as well as the many violent, destructive riots throughout 2020… Yet through their silence, it seems that the federal government is not afraid of the arson and looting, and killing that took place during all these other marches. So that’s a big problem when people take a political rather than a principled approach.”

Meanwhile, National Guard troops stationed in the Capitol are estimated to cost $483 million to American taxpayers. The cost covers Jan. 6 until mid-March. Guards are still in place at the Capitol Police’s request, with their presence mostly tied to Trump’s impeachment trial. Republican Senator Tom Cotton, a member of the Senate Intelligence Committee, noted that it is time to send the guards back home as there aren’t any immediate threats that require their continued presence.